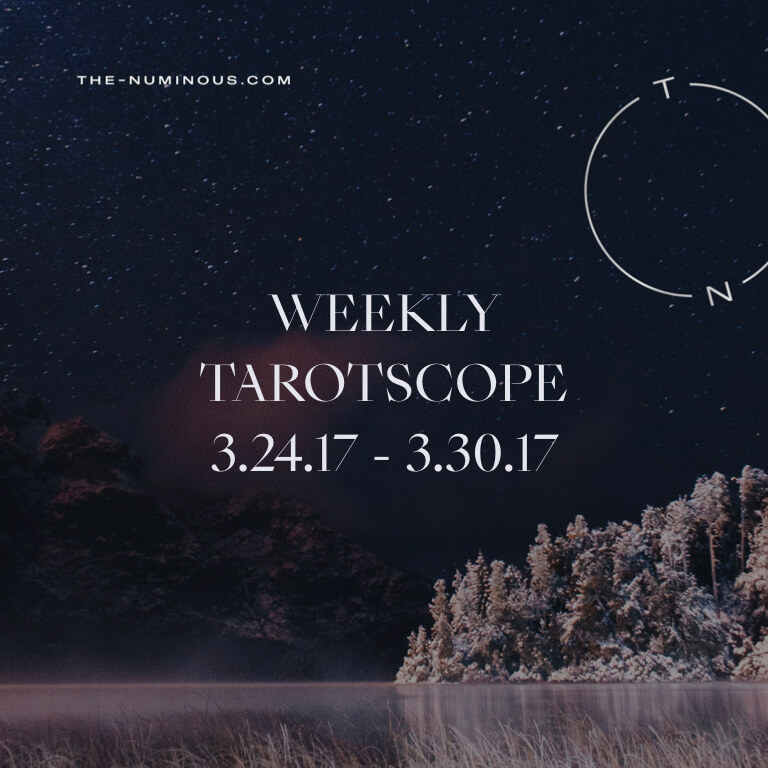 Perspective, or The Hanged Man, is an invitation to get quiet, get deep, and to step outside the patterns of the ego, says Lindsay Mack… 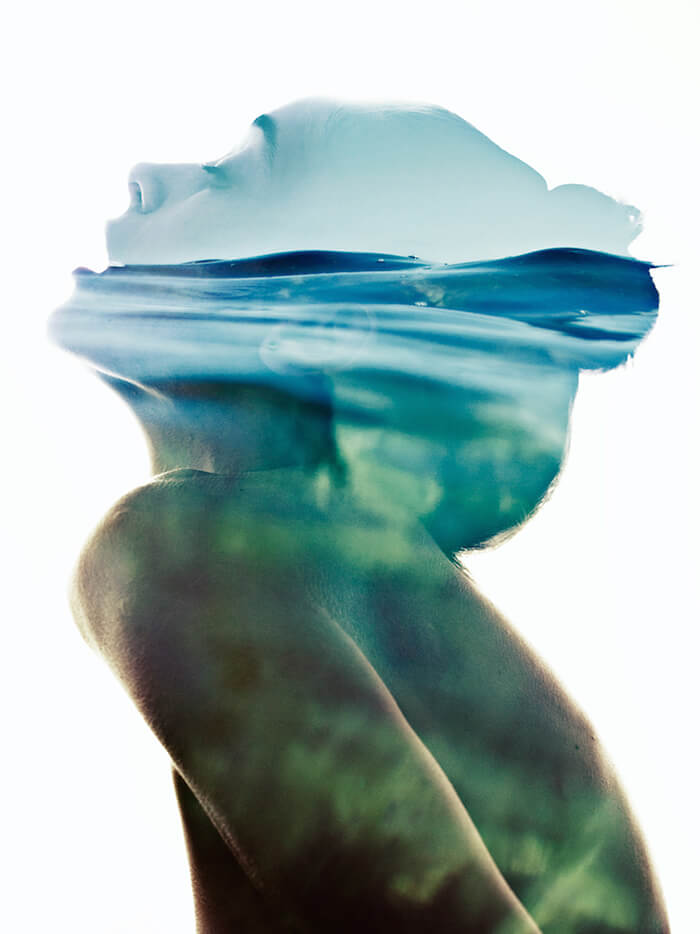 As Mercury goes retrograde, the coming three weeks are the perfect time for some life laundry. For Victoria Cox, this meant asking: “am I living a lie?” Artwork: Aneta Ivanova via Behance.net 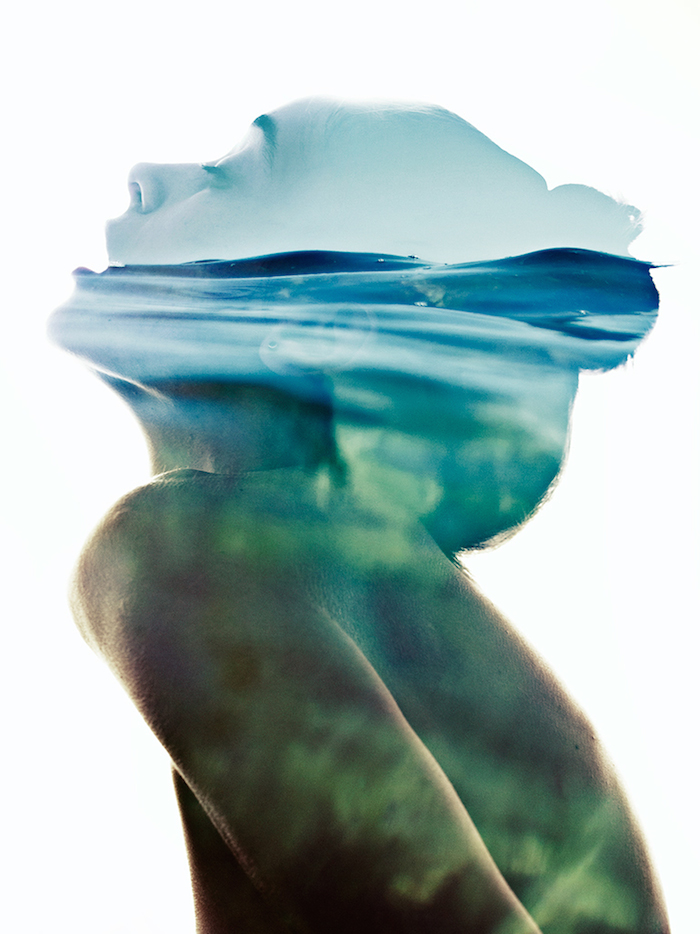 It’s an unsettling feeling to look back on the last decade of your life, only to discover that you’ve been living a lie. No, I haven’t recently been arrested for identity theft nor do I want to be the next Caitlyn Jenner. What I mean by living a lie is this: upon looking back at the arc of my burgeoning adulthood, I was astounded to discover that the career choices I had made, had never, in fact, been the choices I wanted to make.

There was no gun being held to my head. I made these decisions entirely voluntarily. Succumbing to my own burning desire to please others, I began to emulate a path that would impress my father. Abandoning my creative desires, I launched headfirst into a career in law.

Essentially, I took on what had been one of his ambitions and pursued his goal for myself. All, I can see now, in the hope that he would love me just a little bit more. Of course I didn’t realize what I was up to until much later in life, that’s the power of the subconscious mind. But there were signs along the way, tiny whispers asking if this was truly what I wanted.

Ultimately, it was finally paying attention to these signs that opened my eyes to the fact I’d been faking it all along.

SADNESS: The first sign was the persistent, heavy sadness that was my constant companion. I spent so long convincing myself that I was doing the right thing that I simply chose to ignore it. I knew it wasn’t normal to feel this way, but it took me years to confront my sadness and ask myself that terrible question. The one you don’t want to ask because you already know you don’t want to hear the answer. “Why are you really doing this?”

FEAR: Then there was the fear – fear of making any changes to my life. So, cushioned by my regular paycheck, I chose to play it safe. I convinced myself that it was the fear of losing my job that kept me awake at night, when actually I was afraid of something completely different. I was afraid I was missing out on living MY life.

RESISTANCE: I had always wanted to be a writer, yet I never wrote. Instead of putting pen to paper and creating a story, I created a litany of excuses. I was too busy, too stressed and this was killing off any creative inspiration. What I was really doing was a classic case of self-sabotage; I was refusing to get out of my own way. 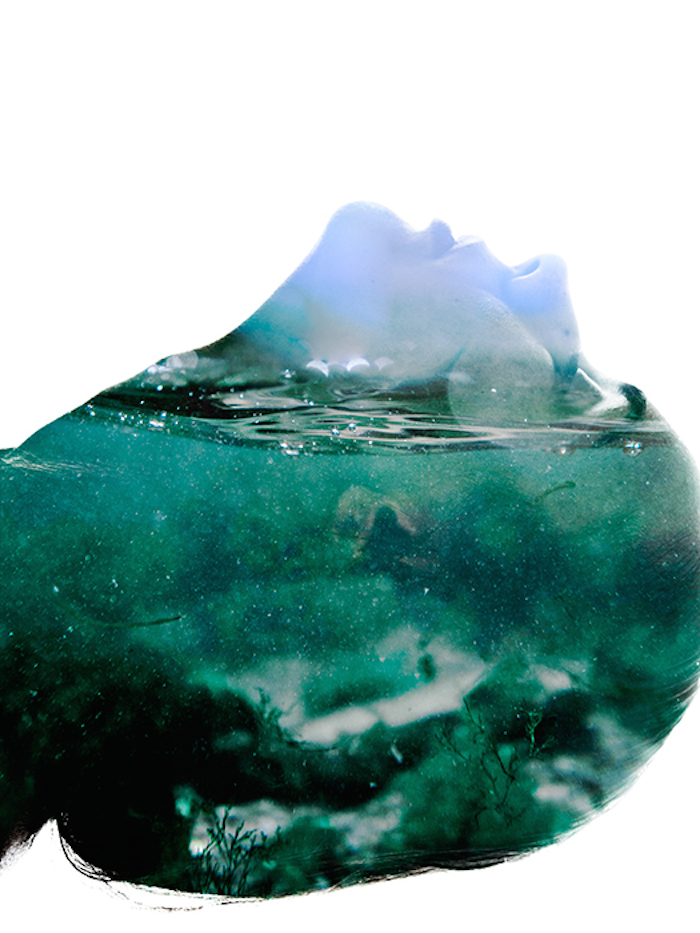 DISTRACTION: I would do anything to avoid facing up to the truth of my situation. Cue night after night when, instead of turning on my laptop to write, I poured myself a glass of wine and checked in to see what The Real Housewives were up to. Anything to divert myself from… myself.

EMOTIONAL GUIDANCE: Sensing my malaise, a friend suggested I try a meditation class. Once my monkey mind finally settled I discovered a sense of peace I hadn’t felt in years. Meditation began to show me the true purpose of emotions and how they can actually provide valuable guidance. Quieting my mind had highlighted the fact that anxiety and fear were my sole companions while I was at work. In stark contrast, I discovered that the only time I felt any semblance of joy was in a creative environment.

BOREDOM: Another sign that showed me I was living an inauthentic life was a constant sense of boredom. I was bored by my work and bored with life. I would plan vacation after vacation in the hopes of brushing up against some kind of enjoyment, but nothing excited me anymore. The world seemed to have become one, long, monotonous…nothing.

ILLNESS: Being stressed and unhappy takes its toll on the mind, and on the body. My body decided to give me a sign of its own making, a physical wake-up call. My skin reverted to its teenage years and broke out constantly. I had severe insomnia and my adrenals were burnt out. My body was essentially screaming at me to get my attention the only way it knew how, through sickness.

IDENTITY LOSS: Despite the fact that I was desperate to change my career I hid behind my profession. I used my identity as a lawyer to impress people, because I was too afraid to show them who I really was. Ironically I spent so long holding up this mask as a “successful lawyer” that it was no longer a mask. I had morphed into somebody that I didn’t want to be. 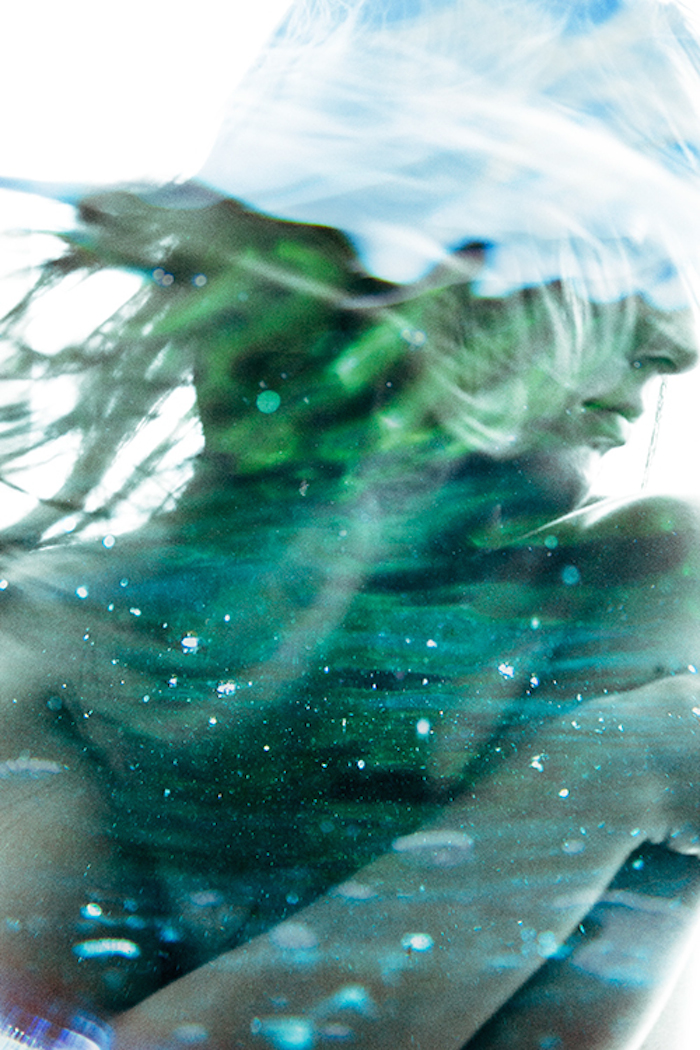 SELF-LOATHING: I was disgusted by the realization that I had let fear hold me back from pursuing my creative dreams. In an attempt to remove these loathsome thoughts circling around my mind, I began journaling every evening. A torrent of hateful words poured forth providing another sign I desperately needed before I could move forward. I now needed to forgive myself.

PERSPECTIVE: The act of writing out my deepest fears in my journal showed me that I was stuck in a victim mentality. Instead of throwing a 24-hour pity party, what I needed was a change in perspective. Why was I choosing to hide this experience in the Life Mistakes folder, when I could file it under Life Lessons instead? Looking at my situation from a fresh perspective showed me that my experience had actually created a swath of writing material. What if I chose to write about my story so that it could help others who were in the same boat?

I’m still a long way off from the writing career of my dreams but that’s the not the point. The point is that each step of my journey has shown me I was living life out of duty rather than desire; acting always to please others rather than pleasing myself.

I hid behind my fears because I didn’t want to face up to the fact that in order to follow my writing dreams, I had to let go of those parts of my life that no longer served me. Yet the very act of finally facing these fears gave me the permission I had been desperately seeking; the permission to pull off the mask of inauthenticity and show my real self to the world. 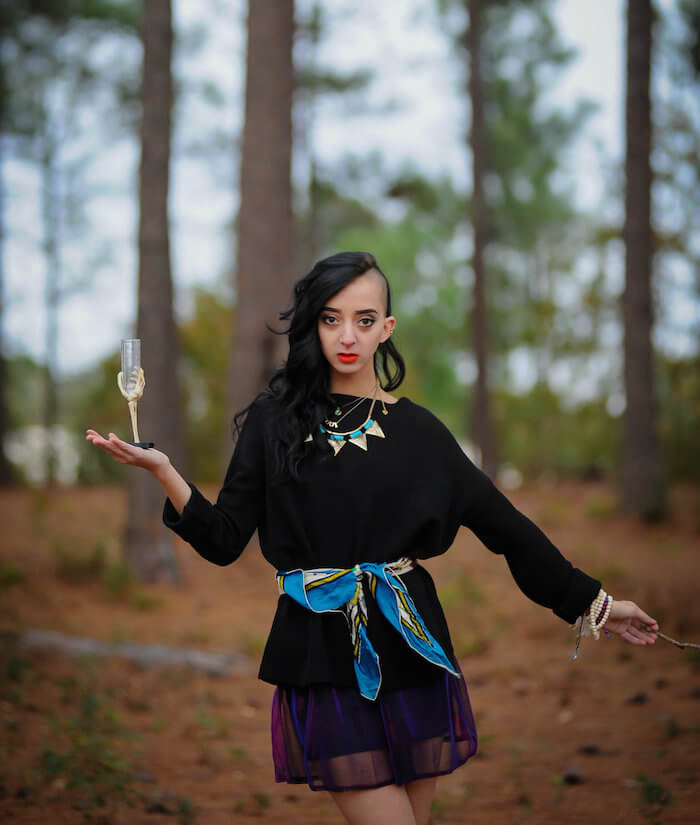 How to fully embody the lessons of the Tarot? Play tarot fashion dress up of course, says Gabriela Herstik…Photography: Mary Decrescenzio 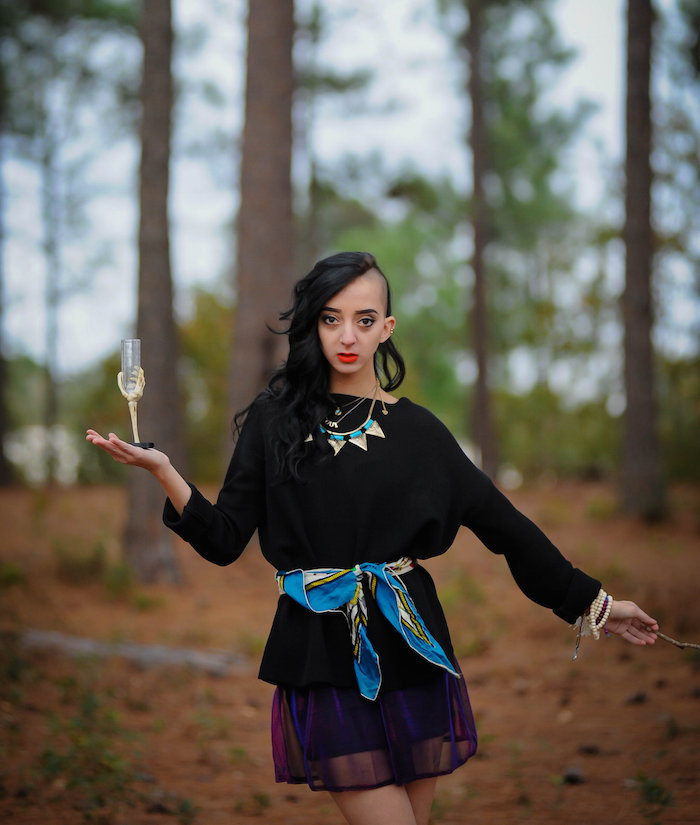 There’s a certain power that arises when you tap your own intuition, your spirit, and declare to the Universe that YOU are the one in charge of your own manifestations and actions. The Magician sings of this. She is inner strength, manifestation and power. And she uses all the elements at her disposal to create.

I wanted to feel alive, regal, and (my version of) colorful in this outfit. I wanted to feel cloaked, and protected and magickal. I wore the dress I wore for my 20th birthday layered under a big, knit sweater, and I added layered necklaces and a scarf I cinched around my waist. I wore two different mala beads around my wrist, wrapped my pentacle necklace into a bracelet.

I grabbed my skeleton hand chalice and figured I would find a wand in the forest and use my eyes as daggers to round up all the suites of the Tarot. I wanted to feel strong and powerful. I wanted to feel like I was magick manifested. 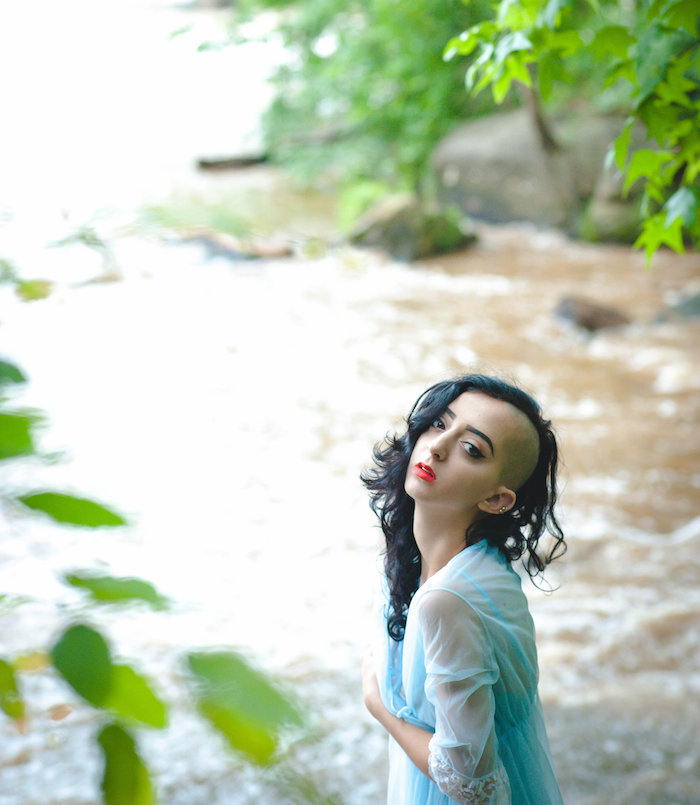 Temperance speaks of working with opposing elements and using them to find balance. Battle water with fire, earth with air. Temperance is a card of healing, of renewal, a flowing stream promising something better, something easier.

I wanted to interpret this card surrounded by water, with pieces in sweet blue and just a touch of red (lipstick always counts). I picked up this wonderful vintage teddy from the place I work, Hip Wa Zee, and paired it with this sweet little robe I got from my friend Ivory who runs an incredibly curated vintage shop called Forgotten Feather Vintage.

I was feeling very “Secret Garden,” and I believe Temperance reminds us to find our own secret garden, our own place of peace. A safe haven to remind us that once we find balance, everything else will fall into place. 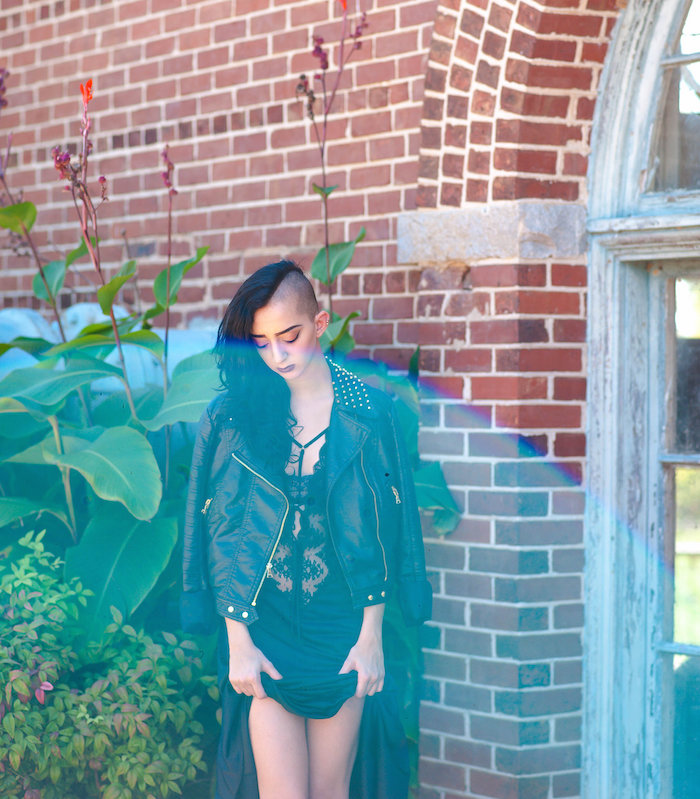 The Hermit speaks of vulnerability, of shedding your layers and moving inward. In the Wild Unknown Deck, the Hermit is represented by the turtle, and the symbolism is both obvious and profound – that underneath your shell, you are your own home.

My spiked leather jacket is like this shell, a barrier between me and the world. It gives me the confidence and strength to own my s***. Pieces like this are  my protection as I move through this life, especially as someone who can be passed over as vulnerable or weak because of my small frame.

I wore a vintage nightgown from Forgotten Feather, something really delicate, to represent the journey inward. Embracing The Hermit means dealing with your own issues face on – finding them, learning from them and hopefully growing from them. It also means picking up your shell, and continuing along your own path as you explore what it means to tune into yourself. 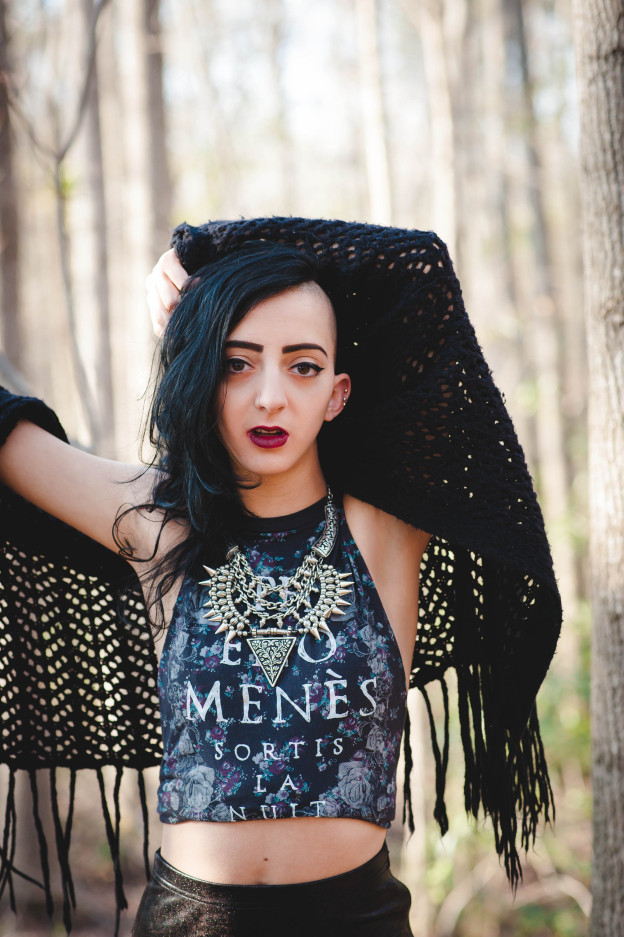 The Hanged Man. This card reminds us to change our perspective, let go of ego, and embrace the sense of rebirth that’s available when we choose to see things in a new light. The Hanged Man is represented by a bat in the Wild Unknown deck, and just like the bat uses echolocation to see, we are reminded to use our intuition when our own sense of perspective is off.

I chose a floral shirt to represent growth and rebirth and a slick leather style skirt to represent how we must let judgments pass over us without resistance. The darker color pallet and oversize knit shawl were inspired by the aesthetic of the card, and the image of the bat itself. I was inspired by pieces that make me feel powerful, intuitive and strong.

You can check out Gariela’s full fashion tarot series at the link.