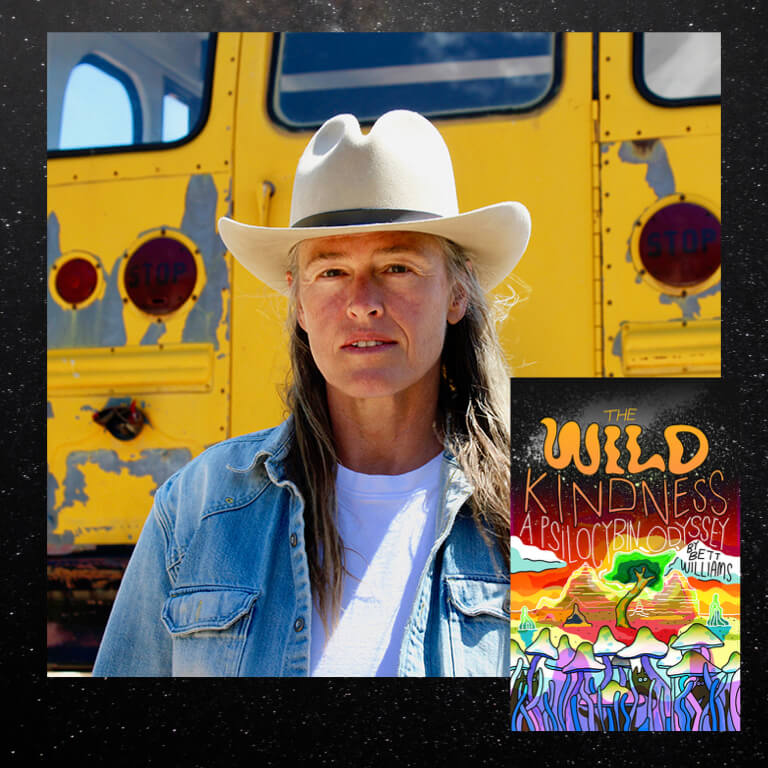 With her book, A Wild Kindness: A Psilocybin Odyssey, author Bett Williams chronicles her seven-year journey working with psilocybin mushrooms in New Mexico. The below excerpt gives a window into the healing portal this opened in her life …

IT BEGAN WITH a solitary trip by the fire three days later, with a cautious, less-than-three-gram dose. When there’s nothing to lose, there’s not a lot to worry about. It was easy to trust a mushroom—to trust anything outside myself and the twisted will that had landed me in this desperate clearing. I placed a small mound of tobacco at the base of a candle, a common offering I’d been practicing since I was a teenager, taught to me by herbalists and indigenous ceremonialists. I burned copal and flat cedar. Lying down on the couch under a wool blanket, I waited.

“You need to stop seeing yourself as a sick person,” the mushrooms said. They spoke to me like this, in fully formed sentences heard internally, like a memory. “In your female form you are the quintessential bedridden Victorian lady on retreat.”

“Yes, it’s true!” I replied. “I do come from a long line of sick women. My mother had polio, tuberculosis, cancer, diphtheria, and Graves’ disease. My grandmother had tuberculosis and a morphine addiction. Sickness is how I locate my ancestry.”

“Oh, I am so very sick!” the mushrooms echoed, mocking me.

“We’re just waiting for you to stop pretending to be sick.”

“But I actually am kind of sick.”

I wasn’t sick, the mushrooms said, but the Trader Joe’s frozen Greek yogurt I’d been eating daily was causing inflammation in my hips. What was going on in my hips was jacking my neck up and this somatic traffic jam was making me depressed and lethargic. The damage could be remedied with ginger.

“Yes, ginger. Will you let us show you?”

An intricate, multi-dimensional golden temple with a Moroccan silhouette arose in front of me. It was vast and bejeweled, with an empty throne at its center. As a lover of minimalist architecture, I find myself resentful of having to describe its attributes. I’ll just say it whacked me with its beauty so thoroughly I was hyperventilating from its splendor. The mushrooms must like me for such a thing to arise. Maybe I’m good at this, I thought.

Personal preferences were tossed in, like my favorite shade of aqua found only in paint made from Smithsonite and contrasting garnet reds and lapis blues set side by side, emanating a lovely resonant sound. And gold, tons and tons of gold, in chunks and flowing strands and the thinnest of threads, gold forming arches and furniture, walls and handrails, cups and hairbrushes.

“This is ginger? This palace?”

“Fresh is best. Keep it simple.”

The mushrooms speak to me, but I don’t hear words like you’d hear from another person talking. It’s as if language arises in my own body, though it’s nothing I’d come up with on my own. Sometimes I am aware of fully formed sentences. Other times, whole systems of knowledge present themselves, devoid of any coherent words at all.

The mushrooms told me addiction starts in the feet, for instance. Your position in the tribe has been injured. An old sheepherder set my leg on the ground. I was a foal, newly born, and my front left leg resisted contact with the earth. He stroked it until I allowed my hoof to lightly touch down. The earth’s subtle electricity flowed into the ley lines of my calf, up into my hips and my neck and shoulders, giving them relief from some long-held, useless question mark.

“You are alive now. There.”

“Thank you, sir. But I am kind of crippled.”

“Get into that loop as long as you like. But really?”

“Come as you are. But you’re not sick, just saying.”

“But what am I supposed to do in a healing ceremony if I’m not sick?”

I’m now living in the mushroom’s wordless answer to this question, continually.

I learned how to literally suck the sickness out of my body and spit it out. I was given poses—mouth wide open, tongue out, eyes rolled all the way up into the skull. This is how one’s own skull becomes that of an ancestor, ready for purification. Mushrooms showed me the resentments to which I was clinging and helped me to let them go. Sometimes I couldn’t let them go and I stewed in rage and self-loathing, observing its contours with equanimity, knowing these hard emotions are a thing shared by all people. Exploring these realms of discomfort and psychic pain, I built a storehouse of compassion for myself and all of us pitiful human beings.

There were times when I landed in a gray in-between, kin to a world of cheap plastic figurines and urban street grease, where random fractal gargoyles of childhood television shows visited only to transmit the essence of mediocrity itself into my tender consciousness. This never scared me. I figured such dislocation was one of three things: a psychic detox, bad digestion, or perhaps I really was that two-dimensional and mediocre, and I had just succeeded at being in denial. Whatever situations arose, I approached them with a strong work ethic that was often notably absent in my real life.

Unwanted images and language forms—usually pop culture detritus, unwritten tweets, random shapes, and creepy critters—always dissipated after I gave them proper acknowledgment, offered some tobacco, and calmly set my attention elsewhere. I attribute the ability to do this to dosage. I always did roughly three grams. With this dosage, a sense of ego still remains. You can steer your own ship. Over seven or eight grams, you might become the actual ship. A very high-dose mushroom trip comes with its own teachings. I’m not uncurious, but thus far, the mushrooms have not guided me to ingest a dose higher than seven grams.

In his essay, “The Mushrooms of Language,” Henry Munn explains that in the Mazatec worldview, it is important that a practitioner maintain “an ethical relationship with the real.” I have taken this as mantra to live by. It’s one that is likely dose-specific. Munn claims the Mazatec did not experience many hallucinations at all during ceremony, that their experiences were mostly somatic and linguistic. That is how it was for me, back when I kept it simple.

“The little children are to be eaten in pairs,” María Sabina said. “They are holy and a sacrament. Don’t do them in the daytime, they make you crazy. Only do them at night.” Okay, sometimes I did them in the daytime, but I tried to do them only at night. Staying close to this protocol served me well in the early days. It kept me humble.

Excerpted from A Wild Kindness: A Psilocybin Odyssey by Bett Williams, out now with Dottir Books.