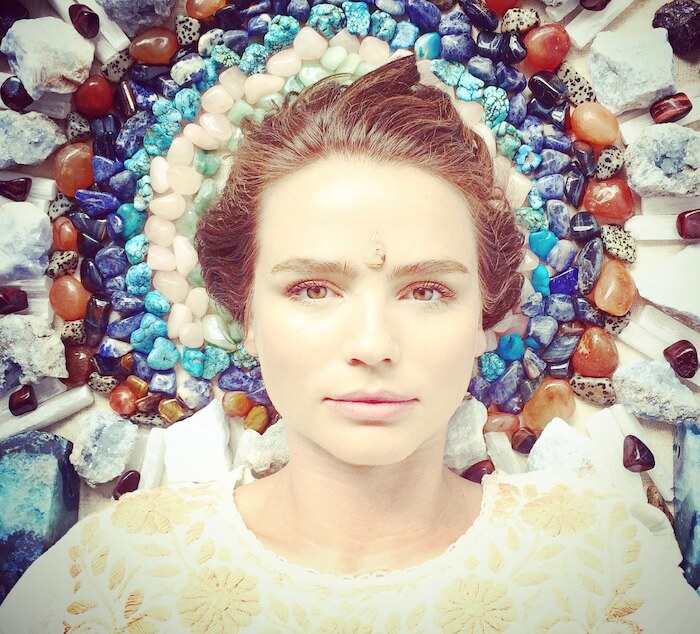 Magic of plants part 1. I’m completely fascinated by the whole plant medicine revolution that’s happening right now. The concept that thousands of people, often the opinion-formers and change-makers of the world, are being sought out by the consciousness of Mother Earth via these medicines, and experiencing vast awakenings.

In fact, I was joking with my friend the other day that the current financial system won’t collapse because of dodgy bonds and unchecked “quantitative easing” – but because all the bankers will end up doing Ayahuasca, and quitting their jobs to make a positive difference in the world instead!

To date, I have not been called to sit in a ceremony myself. The stories of emotional and often physical intensity frighten me, and I know from past practice that I am capable of having similarly (third) eye-opening experiences using alternative, gentler methods.

But still, the fascination remains, and so when I learned about Deborah Hanekamp’s Medicine Readings, which she described as being as close as you could get to a ceremony without actually drinking Ayahuasca, I was obviously super intrigued.

Cut to Tuesday afternoon, when I met Deborah for a reading at my fave spot, Maha Rose. She began by asking what I was working on (as in emotionally), and from her questions about this I could tell immediately that she is a gifted intuitive, with an open and true connection the subtle realms.

I was then asked to lie on her treatment table, and begin a steady tri par viloma (three-part) breath. For the following hour Deborah would invoke the spirit of the plants using scent, in the form of sweet floral tinctures, healing stones and different sound instruments, including her own voice as she sang the haunting “Icaros,” traditional Peruvian medicine songs.

All the time I felt very much in my body – while I was shown, with incredible clarity and in the form of deeply held memories rising effortlessly to the surface of my consciousness, the very root of the issues I’d been grappling with during the recent eclipse period. Tears flowed freely as I was able to make sense of situations that my psyche had chosen to keep hidden from me until now, but in understanding and putting these pieces of my past together, I also felt a sense of forgiveness.

Coming out of the session, I was aware that I’d actually been in a trance-state – my body felt slow, my blood thick, as if I’d be dosed with a heavy anesthetic. One designed to null any pain, allowing me to face the truths that arose without flinching, or looking away. Writing this now, I realize this is probably very similar to what happens in a plant medicine ceremony.

Deborah then told me what spirit, the Grandmother consciousness of the plant, had shared with her during my reading, all of it deeply relevant. We finished the session with her giving me a prescription for a special bath I was to prepare for myself in the coming week, along with a crystal, a meditation, and a mantra to work with.

They say that when you are ready, the spirit of Ayahuasca will find you. And in a week of much confusion, actually, following the two eclipses, last weekend’s Blood Moon, and in the final throws of this Mercury Retro period, she offered herself to me in exactly the form I needed.

Check out more about Deborah and her work at Unityessences.com

Magic of plants part 2. I also watched the brilliant documentary Cowspiracy this week – which has totally cemented my commitment to being vegan. This is something that goes beyond health, beyond all the completely unnecessary bloodshed, and even beyond environmental issues for me now (although, if you need any more convincing, check out this ridiculous fact sheet). For me, this taps into the evolution of consciousness.

Because okay, how’s this for theory. Animal agriculture is by FAR the biggest contributor to the destruction of the rainforests – responsible for 91% OF AMAZON DESTRUCTION. How freaking cool, then, that the Amazonian plants themselves are fighting back – the Ayahuasca revolution opening so many influential minds to the wider implications of this issue.

The broader message of this film + my interaction with plant consciousness with Deborah this week have made me more aware than ever of the connection we as humans share with every other living being (animal + vegetable) on Earth, and the responsibility of love and care to our extended “family” that comes with this.

Also, you can think about it from a karmic perspective – with so much environmental destruction in the name of using flesh for food…doesn’t it make a sick kind of sense that our addiction to animal protein (because that’s what it is, since all tastes besides breast milk are acquired) could be what brings about the extinction of our species?

Wow – big stuff. But it’s not too late! As one commentator in the documentary puts it: “No other lifestyle choice has a father reaching and more profoundly positive impact on the planet than choosing a plant-based lifestyle.” Amen to that.