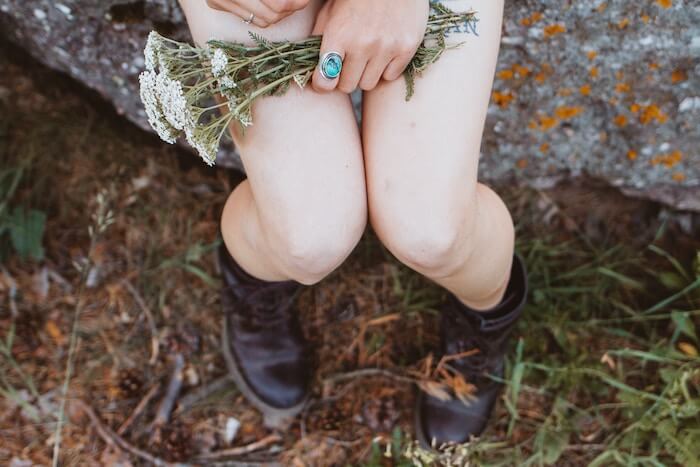 Annie Sprinkle christened San Francisco’s Bernal Park hill “the clitoris of America.” Researching my new book, Sex Drive, I knew I had to visit for myself, and so Sprinkle and I met in a local diner for breakfast. After demonstrating her ability to have an “energy orgasm” on the spot (think Meg Ryan’s infamous turn in When Harry Met Sally, but for real), she promised to take me on a Bernal Park “ecosexual” nature walk, where she would show me how to do it too …

We walk on until the siren call of another tree brings Annie to a halt. “Look at this trunk, it’s like a big penis. Isn’t it beautiful?

I wonder if David Attenborough shows ever give her that Deep Throat feeling. We approach the hibiscus and she says, “You can smell it casually. Or you can imagine this plant is a lover and it wants to give you a gift.”

She smells her new lover, pulls off one of its genitals and sticks it on her third eye. She sticks one on me too. None of this strikes me as stupid or odd. Cornwall isn’t a million miles away from California in terms of country weirdness. My eco or “E-Spot” as she calls it, kicks into action as I notice that a tree we’re passing looks a bit droopy.

“Don’t you think this tree looks a bit sad?” I say.

She knows immediately what to do. “You just need a hug,” she tells the tree enfolding it in a bosomy embrace.  “Oh, love you.” I participate in the love-in, realizing only afterwards that I have just hugged a tree in California. This is the sort of thing that people make fun of back at home, but American Stephanie doesn’t care. Annie looks wistfully at the tree then mumbles something about, “I may be projecting…” She slaps the tree’s butt. “You’ll be OK,” she cracks. “Hang on in there.”

It’s fun going on a nature walk with an ex-porn star. She’s not great on the names of flora and fauna, but she does things like saying hi to her favorite Eucalyptus tree. She plucks a leaf, thrusts it under my nose and chuckles, “Sniff that pantie!”

The sap must be rising from the ecosexy nature walk because I soon have a sort of sexual panic attack. I start gabbling about how I want to check out some seedy places in San Francisco and how I really want to get laid and, “you know that feeling when you want to have sex and you’re not having sex and…”

“Stay in the moment,” she puffs as we carry on up the steep road. They’re magic words and I immediately calm down. I think back to my interview with Barbara Carrellas back in New York a month ago. I arrived too early for the interview and the prospect of writing a book about masturbation suddenly overwhelmed me. What the hell was I thinking of?! I wasn’t even sure what I meant! So I just experimented with letting go: dropping into my body, unsticking from the world so that for a few moments I was just snow and boots and crunch. When I came ‘back’ a few seconds later, it felt like a shot of a week of the best sleep ever.

And then suddenly Annie announces that we’ve reached “the urethral sponge” i.e. we’re in Bernal Park but not quite on the clit. My main feeling is that the Clitoris of America has had a bit of a bikini wax. Its green pubic hair is a bit patchy. There’s a lot of uncovered soil. Maybe the dog walkers nobbled it. There are a lot of them. Annie says it’s the drought. It’s been a serious problem in San Francisco. Annie has actually married the main culprit along with a group of ecosexy friends.

“If you think about it, right now the sun is penetrating your pores,” she says in her incantatory broad-from-the-1950s voice. “They’re fucking your whole body.”

When I ask her how she knew the sun wanted to get married, she says, “We can only assume that things respond well to love and appreciation. Like, if you cruise a bunch of girls or guys, you’ll get the message who’s available.”

She and Beth have also married the mountains, the snow, coal and the ocean. I try and impress her by saying, “My favourite drugs are sugar and the sun.” She enthuses, “Oh, I love sugar too,” but adds that she has to lose weight for the filming of her and Beth’s upcoming ecosexy tour. “Saying it’s OK to be fat, it’s the one thing about feminism I don’t agree with.”

By now we’re sitting on the very top of the park, a bumpy grassy area that slopes down with massive views over the city on every side. Looking at the view, it suddenly strikes her that, “Maybe the earth is the clitoris of the universe.” She laughs. “Betty would say, ‘Oh that’s bullshit!’” She tells me that we’ll do the energy orgasm right here.

I realize that this “energy orgasm” is her take on the heart wank that Barbara Carrellas told me about back in New York. Annie explains that the idea came about when she and Carrellas were investigating more spiritual ideas about orgasm during the AIDS years. “All of us had lovers who got HIV, so we had to figure out how to have safe sex.” They adapted the breath technique from a method taught by a Native American called Harley Swiftdeer. He calls it “Firebreath Orgasm,” but Annie doesn’t “because I didn’t take the very expensive training that initiates you.”

And so my tennis lesson begins. She starts by telling me to, “Say, ‘Yes’ to erotic energy. You have to allow it because it’s there just for the asking.” She points to the tree in the near distance and says that the ideal would be to, “Start feeling sexy and then direct your energy to the tree and see what happens.” She tells me to do some kegels (clenching of the vagina as if you want to stop a stream of pee) and undulating movements of the pelvis. “That’ll stoke the furnace.” After that comes the most important thing of all: the breath.

It’s a great lesson. It reminds me of the Transformational Breathing technique I tried out in my hippie journalism phase with the British teacher Alan Dolan. Basically you breathe quickly in and out, taking in more than usual amounts of oxygen until a wave of euphoria hits you.

Listening to the tape afterwards, I do sound a bit stuck in Witches’ Sabbath mode. Clearly I need to work on moving my energy up to more damsel-in-distress mode. Meanwhile, I am in the ludicrous position of lying with my feet towards the top of the hill and my head towards the bottom because I want to face the sun. But something is definitely happening. I get to the state where I forget to worry about what the dog walkers must be thinking of us.

I have a flash of some of the boring-looking dog walkers I’ve seen in Presidio Heights. I want to unzip them and show them some love. Tell them it’s OK. Occasionally I get distracted by the fact that I’m not feeling anything remotely like an orgasm although Annie is now sobbing. Wailing almost. We get in breathing synch. I try and keep up with her her “Ah! Ah!”s until finally she makes a prolonged, “Oh yeeeeeeah!” presumably when the energy passes out of the top of her head.

I open my eyes and the sky is indeed bluer. There is also dog shit on the bottom of my right boot. I think I won’t say this to Annie. She’s clearly having a moment.

“No, it doesn’t sound strange …” She’s right that the concept of words becomes shaky after this kind of tennis. I struggle to speak.

“We can’t really experience pleasure on a really grand scale unless we can feel the suffering and the blocks and the disconnect somehow.”

Watching Annie with tears streaming down her face, it strikes me that this is what a modern-day nun looks like. Sending an orgasm to promote peace in Nigeria and Paris isn’t that weird. Christians and Buddhists send off distilled thoughts known as “prayers” to try and alleviate world suffering every day. Yet the kind of energy generated during orgasm is jet fuel compared to the economy petrol that comes from a morning at mass. 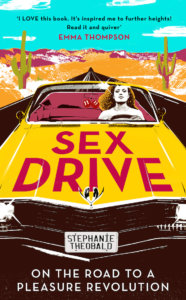 Stephanie Theobald’s Sex Drive: On The Road To A Pleasure Revolution is out now. Join Stephanie in LA for the launch party on December 7th from 6-9pm at The Pikey 7617 Sunset Blvd, Los Angeles, and follow her on Instagram, Twitter, and Facebook, and check out mysexdrive.org  for more details. **And discover more about Annie Sprinkle’s SexEcology HERE!