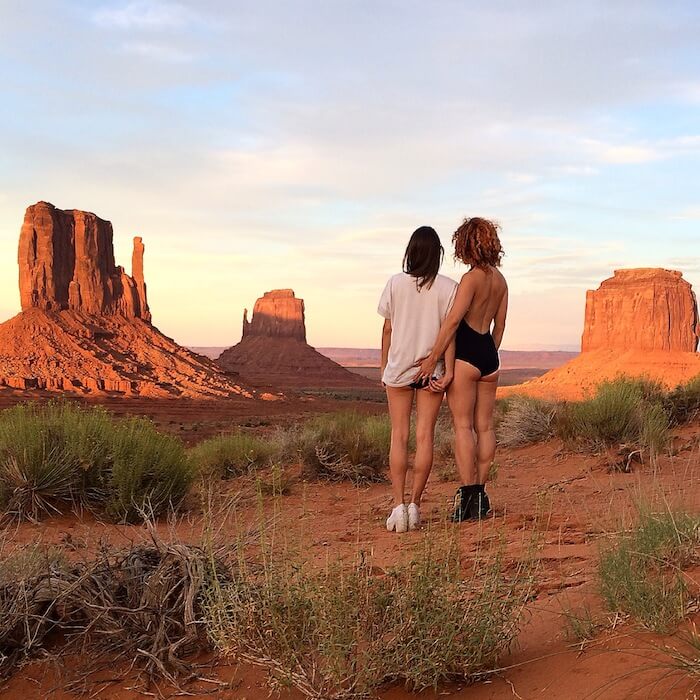 Meet Yogi Vegan Lez, a.k.a. Alexandra Roxo and her girlfriend Orian Barki. In the first chapter of a new series on the challenges of conscious modern coupling, is a road trip actually the best kind of couples therapy?

Just like doing a cleanse together as a couple sounded like a great idea, so did taking a road trip. However, deciding what juice to buy and dribbling pulled oil down your t-shirt in front of your brand new girlfriend is nothing in comparison to being lost in the mountains of Colorado and encountering two large creepy bikers who “reallllllly want to take a photo with you” because “someone” didn’t listen to Siri.

Road trips are the real deal. Sure we live together in Brooklyn, but that’s different. Yoga down the street. $11 green juice by delivery. And our own little love den to nest in. But eight months in and our relationship could survive Mexican food from roadside vendors and lumpy beds, right?

The conversation came up when Orian and I found ourselves in New Mexico, working on a movie called Bare that my company Purple Milk is producing. Orian arrived from New York at the end of the most stressful week in my life, in which both of the lead actors pulled out and we had to recast it , all the while maintaining fake smiles to make all the other crew members not bail off.

I needed a time out, so the next day and we set off in a tiny rental with some Spiderman sleeping bags from the associate producer’s kids, blankets “borrowed” from our Air B ‘n B, and a bag of organic groceries – raw chocolate, kale chips, and Biodynamic red wine a-plenty. And then we headed in the direction of the nearest hot springs… okay spa. Come on, you gotta start a road trip to get back to nature somewhere!

When we arrived, our room was basically in the kitchen with a view of the dumpster. Fuck. I marched right back to reception with my fists in fighting position. But turns out they were booked solid with couples in their 50’s, most of whom were currently asleep in the “romantic” rooms that I had planned on having sex in that night. Orian decided to take over before I snapped and let my “lower self” take over.

By now I was openly sobbing in a leather armchair in a reception painted with “native art” – aka bows and arrows – surrounded by two children playing Angry Birds on an iPad and an elderly German couple sitting silently in flip flops and robes waiting for a shiatsu or something. They casually observed my tears as if I was the lobby fountain, and turned back to their spa menus.

The sweet manager finally offered us an equally impressive room with a bed practically in the center of the restaurant, but with an hour in a private hot spring, a bottle of wine and a whopping discount thrown in. Orian wanted to leave and go look for another place to stay, but I was set on a day of relaxation in the hot spring. I rested my weary my head on her shoulder and told her we had to make the best of it. She agreed. And instead of being grossed out by the overpriced airplane food in the restaurant and the hairy men ogling us in the hot tubs, we drank our wine under the stars and made the best of the bed.

We drove away from the spa the next day with our faces red and splotchy from the free flowing sulphuric smelling mud we’d smeared all over ourselves before baking in the sun. I looked like a burn victim. It was only then I remembered I’d been using Retinol cream because I’m terrified of wrinkles and my Brazilian family swears by it (they also swear by plastic surgery, but whatever) and wasn’t supposed to go in the sun. I began to imagine my face peeling off a la Goldie Hawn in “Death Becomes Her,” pulled my oversized hat over my face and hid.

As we drove through southern Colorado, total silence descended on the car and paranoia began to set in. For some reason, we weren’t connecting. Our only conversation in hours had been a heated debate about google maps. Spiritually I look at things as effort vs. struggle – and so far, this was feeling like a lot of struggle. What happened to us having a blast doing everything together, from buying toothpaste to cleaning the toilet? Were those magic times over already?

Since we’d spent the past month apart, I chalked it up to the fact we needed some time for our energy to “sync” as a couple and tried to breathe despite the by now overwhelming anxiety and dry mouth. Tents, stars, and the enforced isolation camping allows would haaaave to bond us back together.

Now, I’m not new to camping. As a kid we couldn’t afford vacations and went camping one week every summer – my mom sometimes even brought the TV. As a teen I camped under a tarp in the Oregon woods for a week and foraged for berries at witch camp. And as a post-college “seeker,” I shit in a trough at a Rainbow Gathering next to rows of hippies with dreads and slept surrounded by people screaming from too many drugs in the wilds of West Virginia.

You get the picture – I’m no newbie to roughing it. But it was only as we neared Monument Valley where we planned to pitch up the next night that I realized I’d brought three pairs of platforms for the entire trip in lieu of any sensible footwear (I blame my overcrowded stress den of a mind when I was packing). So though Orian was dying to get camping already, we made a (emotionally fraught) decision: a well-choreographed stop-off at enemy no.1, Wal Mart.

As she’s from Israel and has only lived in the US for a year, spending most of her time in Brooklyn buying overpriced Ann Taylor linen from Polish vintage stores, Orian has never been to Wal Mart. And so I tried to warn her. “Look we go in. I get the imitation Keds. You grab the cooler. Out in 20, okay?” “Copy!” she relied, like the Israeli soldier she narrowly escaped becoming.

One and a half hours and $112.00 later we left, defeated, with six bags of crap. I sat in the car with my head in my hands, contemplating what had just happened as Orian insisted; “But we neeeeeeded the pink pepper spray, two glow in the dark t-shirts, an American flag bikini, six jugs of water just in case, and a copy of US weekly. We really did.” I got extremely annoyed in this moment and felt my skin begin to crawl, but told myself to calm the fuck down. And on we marched.

We arrived to Monument Valley as the sun was beginning to set and decided on our camping spot, naturally choosing the one furthest from the trail so we could walk around in our underwear in peace. Our quest for solitude meant by the time we’d hiked our groceries, tent, firewood, camping chairs, tent, cooler, and our Wal Mart haul, the sun was nearly down. I decided to get our tent up as fast as I could, in which I am well practiced.

And maybe it was the drive, the trauma with the mud, or perhaps the lack of greens in my current diet? But I just couldn’t work it out. Which is when Orian stepped up to the plate and nailed it like an angel in a one-piece white American Apparel swimsuit. It was beautiful to watch. And as we drank our wine and watched the sun go down, it felt like things were finally beginning to gel.

I realized that this whole trip, being forced to make decisions about things like which non-organic snacks to buy had left Orian and I feeling like strangers. And our differing road trip priorities were distracting us from the point – the love we feel for each other. It’s rare for any couple to have time away from our obligations and responsibilities, and we needed to remember to just enjoy each other, regardless of the circumstances.

And as much as a week in Cabo or Tulum would have been more like the Valium my soul really needed, absorbing the epic beauty of Monument Valley I realized there’s a reason couples go on these quests together. Who wants a quick fix when it’s the road less travelled that brings growth? Trying three times to put a tent up together can be bonding. Really. Same for being forced to eat tacos made with GM corn from roadside vendors until the flatulence is just white noise.

People go to couples therapy to confront their differences (like why the hell do you leave your shoes right outside the tent where I trip on them every day?) So here’s a tip for saving a shit-tonne of money. TAKE A ROAD TRIP. Get annoyed when your partner goes 60 mph or when they aren’t paying attention to google maps and miss the turn-off right when there’s no other turn off for like 100 miles. GO THERE. Don’t be afraid to let your girlfriend see you cry in public in at least three places in an attempt to get your way. Talk about a lesson in acceptance.

NEXT UP ON Yogi Vegan Lez: Navigating times of celibacy for ceremony….