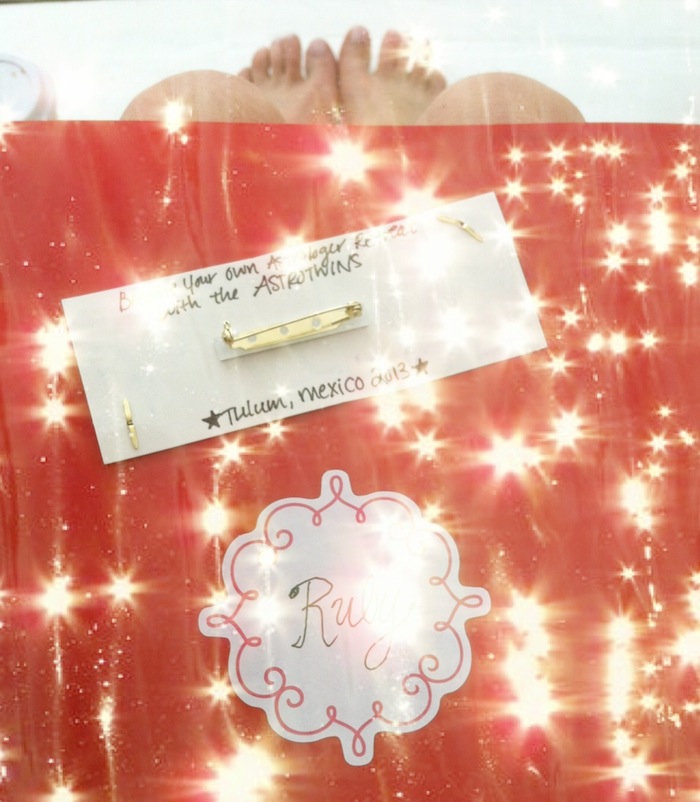 I’ve always thought astrology was the coolest thing. The idea that my soul chose to be born at a particular time, so that in this life I would embody certain personality traits to help me on my karmic journey. And as a believer in what’s meant-to-be, isn’t the circumstance of your birth the ultimate?

I’m also a believer in putting your energy where you inspiration is, and so when I heard that the Astro Twins were hosting a ‘Become Your Own Astrologer’ retreat in Tulum last month it was like every quantum atom in my body realigned to make sure I would get there. I’ve been hooked on the twins’ weekly and monthly scopes for the past couple of years now, and I got the vibe they’d bring a healthy dose of Numinosity to the mathematical side of astrology. Tali even met her husband and got married at Burning Man. I rest my case.

When I interviewed Susan Miller recently, for a story on astrology for the UK Sunday Times, she told me to; “run a mile from any astrologer who tells you they’re psychic.” And I hear what she’s saying, this is a science we’re dealing with. But my intuition has always told me there’s more to it than simple math. With so many ways to interpret each sign, planet and house of the zodiac, surely there’s room for some third eye insight?

Speaking of distant planets, arriving in Tulum from the East Village was like stepping into an alternate reality. Switching up sirens and city stress for endless sand and sky is like putting your soul on a juice cleanse. A shock to the system that will soon give you new eyes. 18 women had travelled from as far as Melbourne, Australia, to be here, and we star sisters convened on the beach that first night under the illuminating rays of an Aquarius full moon.

But it wasn’t the skinny-dipping, or the rooming in twos, the trips to the supermercado for bottles of rose, the Qoya dancing, or the naked Mayan mud ritual that would bond us the most on the Astro Twins retreat that week. It was the astrology workshops themselves. Every morning after breakfast, we would convene to dive into our charts, guided by the twins to divine meaning in the three-part “sign-planet-house” puzzles we found ourselves presented with. My moon is in cancer in the eighth house? Okay so either “my emotional needs” (Moon), are met by “women” (Cancer) in my “intimate relationships” (eighth house)….or “I need” (Moon) “security” (Cancer) from “long term investments” (eighth house). Or, in my case, both.

Sharing our findings sometimes felt like group therapy (“you feel how about risky one-night stand sex??”), but, as discussed above, with my Moon (emotions) in Cancer (women) in my eighth house (intimacy), I was totally down with this. I would rather cut to the chase with my girls and get to the important stuff than talk small any day – hello Mars (passion) in Aries (self-expression) in the fourth house (sensitivity).

So you can begin to see how this has been going since. I’m prone to introspection anyway, always wanting to know why I respond to things a certain way – Sun (my essence) in Aries (self-ish-ness) in the fourth house (self-care) – and as the twins’ patient teachings about the meaning of the different aspects of the chart (sign, planet, house) begin to sink in through steady repetition (fuelled by endless fascination), I am able to apply them to every part of my life. Especially the areas I’d usually prefer not to think about because; “I don’t want to be like THAT.” As Ophira so succinctly put it; “astrology can be an awesome tool for radical forgiveness.” Because guess what, knowing every aspect of your chart is a fast track to accepting all the different facets of your personality.

Of course, the most fascinating lesson of all was when we ran our charts alongside those of the people who have the most impact in our lives; lovers, family, colleagues. The patterns around the people I’m drawn to, connect and work the best with, are cut as clear as glass. And no wonder it was love-at-first-sight with my husband – we both have Venus (attraction) in Pisces (romance), mine in the third house (synergistic partners) and his in the seventh (relationships).

Where do I go from here? As the complexities of the science began to reveal themselves by the end of the week, I realised the study of astrology can be a lifelong expedition. What an amazing place to start.

The Astro Twins will begin a five-week Become Your Own Astrologer online course with Hay House on September 18. Book before September 1 for early bird rates.

The next Tulum retreat is scheduled for April 28 2014. Accommodation is at the Shambala Petit Hotel.