With her #PopCultureTarot, Vix (a.k.a. the New Age Hipster) is on a mission to help us wrap our pretty human heads around the wisdom of the Tarot. First up, what do the Queen cards mean?

Any self respecting Numi or New Age Hipster probably has a deck of Tarot cards lying around somewhere, or maybe a bag of runes, or at least a Magic 8 ball. If you’ve ever dabbled with divination, you’ll be familiar with the magical feeling of getting your hands on a promising new tool to find out your fate and fortune.

But it can easily all come crashing down around you when you start trying to memorize the meanings of the different cards in your brand new Tarot deck. Maybe the secrets of the Universe aren’t so easy to discover after all.

But before you throw a tanty and chuck your deck in your bedside drawer where it will stay for the next nine years, take heart! Because right now we’re going to use #PopCultureTarot to unveil the mysteries of Tarot – starting with the court card Queens.

:: QUEEN OF WANDS ::
First up, the Queen of Wands. If we go back to Tarot 101 we’ll remember that Wands are the action cards, and sometimes the Queen of Wands is holding a flower, or has a cat, so we can assume from that that she may be some kind of ‘Elemental’ Queen.

Elementals are like the fairies and nature spirits, and even though they are sweet, helpful and loving, they have a seriously fiery side to them. And Wands is the fire suit after all. Okay, so what the hell does it mean when you see this Queen in a spread?

It’s Molly Freaking Weasley from Harry Potter guys! She’s the coolest mom ever! She’s sweet and loving and good at baking, but if you piss her off WOAH watch out for some epic fireballs heading your way. So if the Molly Weasley card comes up as a person, the reading is simple – the person in question has some similarities to Mrs Weasley.

She might have red hair, be super passionate and sparky, take in kids who have nowhere else to go or have some anger management issues (especially if reversed). But she cares deeply about those she loves, and those who need her help. She’ll always be there for you in a jam, or to make you some tea and toast with jam.

But court cards don’t always come up as people. If you see Molly Weasley when you’re thinking about taking a trip – buy the ticket! If you’re asking about a relationship, maybe it’s time to chill out a little. Career? Follow your passion, which might just involve nature and the animals, or fostering!

:: QUEEN OF CUPS ::
So how about the Queen of Cups? Cups is all about emotions and water – so relationships, crying, drinking, obsessing, searching the very depths of your soul. Hello, it’s Bridget Bloody Jones!

Bridget isn’t always the most upright Queen. She spends a lot of time in the negative aspects of this card – crying, drinking, obsessing… but the positive aspects are that she’s honest, loveable, kind, sweet, and loyal. She loves love, would do anything for love, and not just for a romantic partner, but for her friends and family too. In fact she’s often found giving way too much of herself to people who don’t appreciate her at all.

So when the Bridget Jones card comes up as a person in a reading, we can assume that she has the potential to make terrible love life decisions but is also the sweetest gal in the deck. As a situation Bridget reminds us to be open to love, to be kind, to see the best in others, and to see the best in any given situation. Reversed it’s a warning not to open that second bottle of wine!

:: QUEEN OF PENTACLES ::
The Queen of Pentacles is one seriously awesome chick. With the energies of Earth, daily life stuff and money around her, she has a super rich husband but she doesn’t even need him. Powerful, strong, determined, and super hot, she can basically get paid for just breathing. On top of that she’s actually just really cool. Everyone wants to be her friend, not just because of her money but because she totally works it.

Uh, sounds basically like Beyonce to me! Damn girl, you got it all! She’s practically a super hero. She’s built an entire empire and she did it all on her own. She’s like one of the most powerful women in the world but you’d still feel totally (a bit?!) comfortable going out for cocktails with her, because she’d make you feel like a million bucks too. When this card comes up it’s a call to embrace your inner Beyonce girls (and boys!) Stand a little straighter, walk a little taller, speak up and don’t be afraid of your power.

Situationally, this card can represent good things coming financially or career wise. When you see Queen B in a relationship reading, it’s a signal to keep your own bank account, and stay away from drama girlfriend! No Queen needs a King (okay, except maybe Queen Bridget), but this Queen is so busy being golden that she forgets to even think about her man most of the time.

:: QUEEN OF SWORDS ::
Lastly we meet the Queen of Swords, the suit of intellect and the Air signs. This Queen considers logic to be her best ally. Intelligence outweighs beauty, passion and following her heart, and although she’s a brilliant leader she’s definitely the least approachable lady in the deck.

Okay, so the Queen of Swords is the actual Queen – Queen Elizabeth II! I love the Queen. She’s this cool old lady who’s like the boss of the country. She’s ruled for about a gazillion years and even people who are anti-monarchy don’t have much bad stuff to say about her. She’s so uber-professional that you can’t really fault her, but do you ever see her giving Prince Harry a cuddle? Hardly! What about a PDA for her hubby? Uh, I think they held hands once in 1952.

Liz is a steely woman who believes in honour, tradition and keeping up appearances. She knows a lot, and if you had the courage to ask her she’d give you some brilliant advice. When she comes up in a reading you know this is a powerful woman who knows a hell of a lot, and can totally help you out. But don’t expect any sugar coating, or for her to “get it” if you start crying or something.

If you’re reading about a situation, Queenie can remind you to find balance and think with your head as well as your heart. Not every decision in life should be made with the fiery passion of the Wands or the emotionally intuitive Cups. And Pentacles X Factor is all well and good, but if you don’t use common sense once in a while you’ll end up in all sorts of reversed scenarios.

The battle we all face is in balancing these aspects of ourselves so that we don’t end up too emo, too money focused, too fiery or too aloof. Remember Bridget when you’re feeling a little too logical about love. When you’re seriously overwhelmed with a crush, embrace your inner Beyonce. When you find yourself becoming too obsessed with online shopping for clothes that you think will make you look like Beyonce ask yourself – what would Molly Weasley do? And when you find yourself sending a few too many screamers, try channelling some right royal grace like Liz.

Read more #PopCultureTarot at Newagehipster.co and connect with the New Age Hipster on Facebook 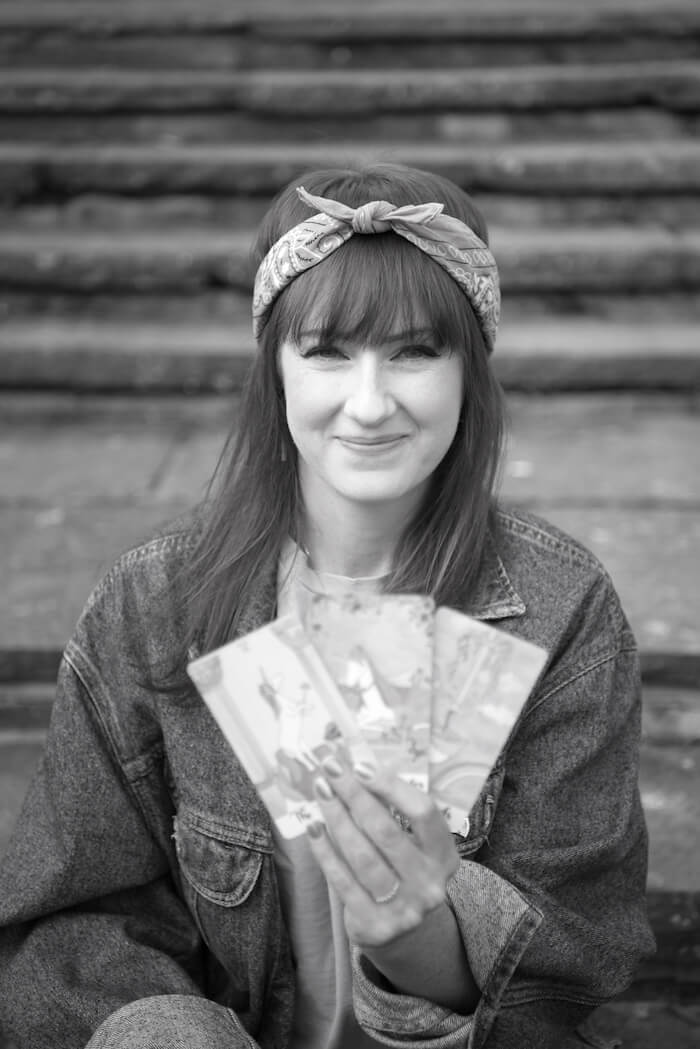 MY MANTRA: All good things that are for me find me // MY MISSION: To leave the world even just a little brighter than it was when I arrived. // MY STYLE: Vintage, anything violet + Vans // MY SIGN: Gemini + Pisces Rising // MY HEALING: A combo of high vibe ascension meditations + eating popcorn while watching Riverdale