As Mātā Amṛtānandamayī Devī, a.k.a. Amma, celebrates her 60th birthday today, the Astro Twins Ophira Edut examines the chart of the Hugging Saint – a woman who was born to heal the world. 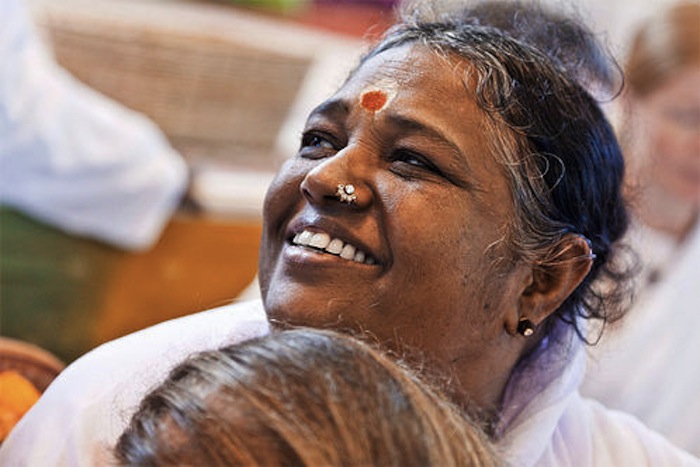 Walking through New York City’s East Village, I recently spotted a red bumper sticker plastered to the curb bearing the words “Love is telepathic.” Groovy sloganeering aside, there’s one person on this planet who would probably agree. Her name is Amma, and she’s hugged 33 million people all over the world. That’s right—hugged. Ordinary people like us, from all walks of life, stand in line for hours for a magical if momentary embrace from the woman whose name, given to her as a teenager, means “mother.”

With seven planets forming a six-pointed star in feminine signs this July (a grand sextile, in astro-terminology), there’s no surprise our world is crying out for mother energy. The planet and its inhabitants need nurturing, compassion and connection like never before. So when The Numinous asked me to analyze Amma’s chart for her 60th birthday, I couldn’t say no.

I myself have never been hugged by Amma. I came to the Manhattan Center while she was in New York City, saw the long line, and my impatient Sagittarian nature overrode my desire for a spiritual squeeze. Full astro-disclosure: with my stiff Capricorn rising, I was secretly relieved. I once became notorious for being a “one-armed hugger,” and if I can get out the door with a wave instead of an embrace, I’m good. Yet, I also think it’s because I’ve spent too many years trying to be “serious” and responsible, trapped by my own stoic body language. I’m probably starving for affection, and will be the person who bursts into tears the second I meet her.

After hearing raves about Amma’s healing touch, I came to regret my moment of impatience and uptightness. I have certainly felt her radiant love telepathically since then, just seeing the glow she’s given friends, hearing about her incredible presence, and of course, by looking at her astrological chart. Now, I’m gonna have to let go of my silly stance and let myself experience Amma up close. Until her next visit, it will just be through the planets in her horoscope wheel…which is kind of an esoteric embrace in my world.

Here’s what stands out in Amma’s birth chart to me: 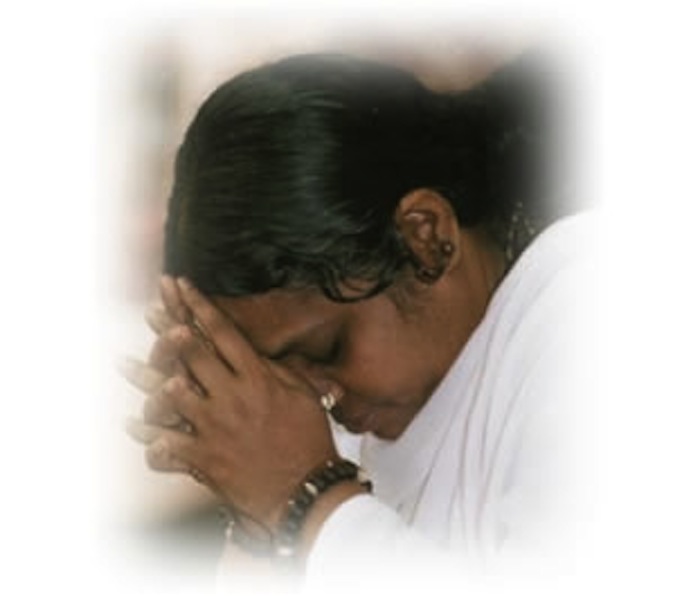 All you need is love: Sun in peacemaker Libra.
Amma, not surprisingly, is a Libra. In fact, she has four planets in the sign of unconditional love, peace and harmony. Libra rules relationships and interpersonal matters, and perhaps this is why Amma can stay awake 22 hours on an average day, giving hug after hug. In my experience, many Libras don’t really like or need to be alone—in fact, they thrive on the energy of other people.The planets Amma has in Libra are the Sun (her identity), Mercury (communication and touch), Neptune (healing and compassion) and Saturn (authority and stability). No surprise she can radiate sacred, comforting Neptunian energy but also has the dignity given by heavyweight Saturn. The combination of glamorous Neptune and serious Saturn has the marker of someone who is, in essence, a professional healer or empath. Naturally, she’s so much more than that. While she’s got her arms wrapped around the world, Amma also runs a huge, largely volunteer-run non-profit that serves orphanages, hospitals, programs for widowed and elderly people, and builds homes for the homeless worldwide. Since Saturn is also about building and structure, no surprise that she her giving also takes on concrete form.

Amma’s moon sign is steady, salt-of-the-earth Taurus.
The moon governs our feminine energy, and shapes the kind of mother women will be (even if they are spiritual mums, like Amma). Set in sensual Taurus, the most grounding and affectionate zodiac sign, Amma’s moon sign gives her the power of healing touch.

Playful, yet dignified: Amma has a regal Leo rising.
According to her sources, Amma was born at 9:09 am, which dictates the ascendant, or rising sign, in the chart. The rising sign rules the “face” you show to the world, the first impression you make, or your appearance. Amma has the beauty, presence and passion gifted by a Leo ascendant. Her expressive face, radiant smile and protective Leo hugs are all part of this chart factor, too. Leo is ruled by the Sun, the giver of vitality and joy. As a result, Amma’s “hugs” are probably more an exchange of life force energy—or a transmission of her own abundant supply of it, awakening people from feeling separate, isolated or alone.

Energized by giving: she has Mars and Venus in Virgo, the sign of service.
Energizing Mars and love planet Venus are both in Virgo, the helper and healer sign. Perhaps this is also why Amma stays awake for the majority of the day giving. With Mars here, she’s energized by her acts of service—and says as much herself. Venus adds palpable love, beauty and harmony to the equation. Both are in Amma’s first house of fame, making her a public figure for her work.

Mother to society: revolutionary Uranus is in Cancer, the mother sign.
Uranus is the cosmic liberator, in Cancer, the sign of the mother and nurturer. Nestled in Amma’s eleventh house of groups, humanitarian work and social reform, she has indeed become a virtual mother to the world.

A karmic destiny to serve: North Node in Aquarius, sixth house of service.
The north node (destiny point) in Amma’s chart is Aquarius, the zodiac’s humanitarian sign. It’s also in her sixth house of service. Her south node (past life karma) is in regal Leo, in the twelfth house of compassion and healing. This indicates that she’s had fame and fortune in past lives, and doesn’t need to live a life of luxury this time around. However, she carries the energy and fullness of having experienced the pleasure of material riches in former lifetimes. She is abundant, rather than lacking—although she spends her life hugging, the residual Leo energy also helps her avoid lapsing into the “martyr mother” role. Amma is not quiet, invisible and suffering silently. She’s the buzzing center of all the action. Aquarius is the sign of groups and communal living, and Amma lives her entire life in a crowd. She’s a leader, the hub of her many charities that run without her being present.

So here’s a 60th birthday hug, 33 million strong, to Amma. I hope one day to experience an in-person hug from her.