Growing up British but with her family history in Mauritius, it was reconnecting to her Hoodoo roots that helped Stephanie Victoire finally feel at home …

My grandmother always said that bad luck could never follow you across water, the oceans would purify you anew. That the ocean could take away spirits who wanted to join you for the ride, and you’d land on the other side of water, cleansed and blessed.

Flying every few months back and forth from England to Mauritius as a child, I was always set to start anew. On hot tarmac I’d step with tiny feet in jelly sandals, my hand in my Nana’s, and my English tongue would immediately be lost, Creole nestling itself into my small canon of words. Crossing the Indian Ocean back, somewhere over the Sahara desert I’d leave that language behind again, which at the time had no dictionary—no official place in the world. And, just like that, I’d become English again.

I acquired a nickname with my Mauritian relatives: Ti Anglaise, “Little English One.” With English-born island friends at school, we’d laugh that I was a “coconut”—brown on the outside, white on the inside. But I also remember how confused and disconnected from myself this made me feel. I was two different things, rather than one whole. I was being mocked for my Englishness, while being called out as somebody who looked like she had roots elsewhere, but was actually clueless as to what they were. From a very young age, I had no idea who or what I was—something I would grapple with well into my adult years.

My parents are both Mauritian, my mother white with green eyes, my father dark-skinned with brown eyes. It was hard to explain to people that I wasn’t ‘mixed-raced’ as they classed me. The simple fact was, the French somewhere in our lineage had milked our tea-colored skin and heavily creamed my mother’s. I wanted to look like her, to be her child in the eyes of strangers as we walked down the street together.

But there’s no denying I was birthed of my grandmother’s line. Even though her skin is also pale—more European-looking than Mauritian—there’s no question that she is Creole. It’s a glint in her eye as she bites into her chilies, the way she fries up salt-fish, kneads flour for roti. Her Creole is in her accent; thick, warm, and wise. She is full of phrases and double-entendres that only hold meaning in the language they were first created in. There is magick in everything she does and says, in the way she speaks to God under her breath.

Mauritius humbly hosts a multi-religious population. A Hindu temple is built next to an Islamic mosque that’s built next to a church. Be them Hindu, Muslim or Catholic, all will tell you that they are Mauritian. I learned very early on that I was not Indian-Mauritian or Chinese-Mauritian, or of any other Asian heritage. We were Creole people, descendants of African slaves, the first people to inhabit the island when it was colonized. We had grown with the sugar cane fields from the ground up, with the papaya and lychee trees. We were the ones who sang sega songs to feel some small piece of freedom in our voices, beating our cries into the Ravanne drum.

I was sent to Catholic school in London, with my very English packed-lunch of ham sandwiches, crisps and yoghurt. But Mauritian Catholics are not exclusively Catholic. Sure, they feel connected to saints and enjoy the ritual of prayer and church service—but they also believe in hexes, ghosts, omens and witchcraft. And I had all this knowledge with me, too.

But I had no translation for what I witnessed growing up, playing in the tropical gardens of my Mauritian kin: the incessant sweeping, the lighting of candles at the mini mausoleums, which to an outsider seemed like a prayer space. I did not know back then that these shrines were for keeping the garden protector spirit, Gardien Lakour, appeased, with offerings and prayers in exchange for keeping ‘evil’ spirits away from the house.

I also learned that if you sweep a bachelorette’s feet with a balyé—a makeshift broom traditionally made of twigs and vegetable matter—the single lady will never be married. If you throw salt under the chair on which an unwanted guest is sat, they will not return to your home; another handful on the doorstep after they leave will ensure they’ll never darken your door or your life again. If I had a rupee for every time I heard such superstitions from my grandmother, I’d have enough to buy myself a villa on the beautiful Northeast coast. Except these were not superstitions but traditions, brought from Africa, the same way they arrived in Haiti or New Orleans or anywhere else the magick found itself.

Rebelling against everything I was taught in my teens, I left my ‘Mauritianess’ alone, confused about whether I’d really had it anyway, and certain I didn’t want to be Catholic. But after a brief spiritual hiatus, witchcraft found me. Just as Mauritius is a patchwork of different nations and different religions, I developed my own blend of spiritual truths, mixing in Pagan, Hermetic, Native American, and Eastern ideas and practices. Along the way, I’ve worked on healing my confusion around my identity. But I’ve still never felt fully in my skin—more one with the cosmos than with life here on Mother Earth.

Mother. The very word can knock me unsteady, see me crying on my knees. I’ve wanted so much to feel I belong here, I’ve dug my hands into cold, loose soil just to see if I could feel a heartbeat. I’ve travelled the world to try to make the whole planet my home. And it was during a trip to New Orleans last summer, I discovered there was something I’d overlooked.

The Creole words, the Creole faces. Similar to those of my family’s island, but not quite, still I was asked to explore it. I felt it in puddles of rum, the worn wooden doors, the whispers of ghosts. Something was being recalled in my blood, and I warmed to the sensation of ancestral spirits drawing close. It was powerful and overwhelming, a feeling that I was being called back to something I’d find depth and beauty in—the depth and beauty of where I truly came from, that was the makeup of me.

I started to read books on Hoodoo, and as I read through conjures and fixings, I heard these stories in my grandmother’s voice. Because of course there was Hoodoo in Mauritius. We had come from the same place as the Creoles of New Orleans. Brought our magick down generations with the teachings of the tongue, the ways of the elders, and my grandmother was no different. Old tales told under the moon on a balmy island night; the properties of herbs explained in the kitchen; candles lit for prayers; curses broken with salt, heart and will.

She is a witch, a priestess; a spirit woman, just as I am growing to be. As I recovered memories of the magick in my family, something in me shifted. I had found the roots I was looking for. I stepped further into my power, shedding from myself a fragmented identity, and in its place claiming one that feels like the entire Universe itself. Each star, each planet, each galaxy is a piece of me—a complex and powerful harmony I can feel as I walk the land of this great mother we call Earth.

All of it is mine to belong to, and all of it is me. This magick that Mauritius possesses so quietly finds its voice in me. A witch, a priestess and a spirit woman. This has been my birthright to claim all along. I feel blessed to have been born in England, to speak a language that can share with the world the stories I have stored in my Creole blood. I will tell them with pride.

Stephanie Victoire is a London-based writer and author. You can discover more of her writing HERE, and follow her on Instagram @petalandmossapothecary for more about her HEALING WORK. 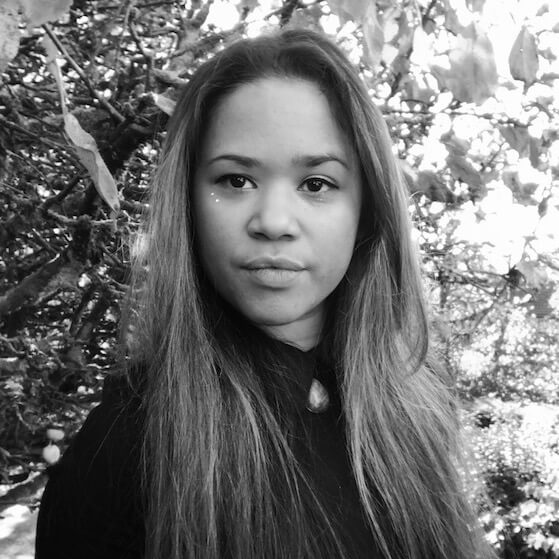 MY MANTRA: The Universe is always speaking to us, all we have to do is listen.// MY MISSION: To support anyone in becoming their highest and best self. // MY STYLE: Grunge Medicine Woman// MY SIGN: Taurus Sun, Pisces Moon, Gemini Rising// MY HEALING: Connective and explorative conversations with heart-centered people.