Among more spiritual circles, alcohol is considered the lowest of the low-vibe highs. Facing two weeks of steady holiday drinking, Ruby Warrington considers what her attachment to booze really says about her. 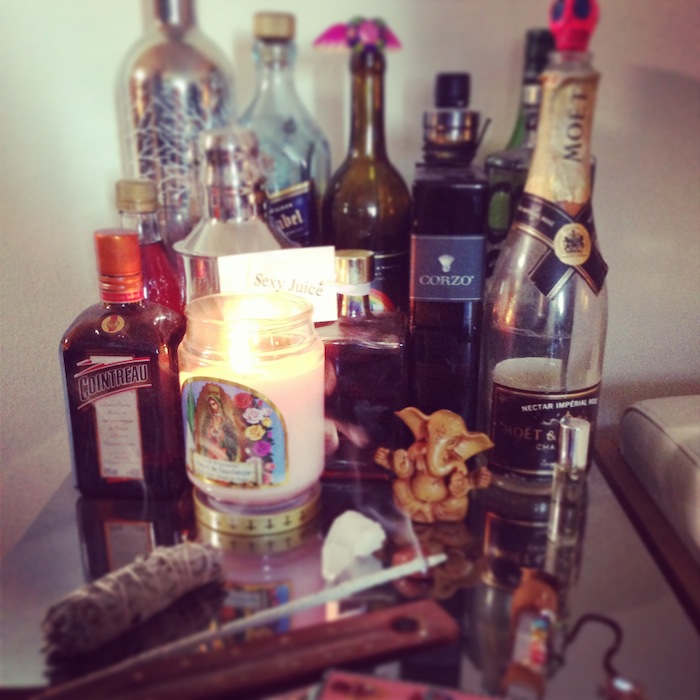 Ethanol, also called ethyl alcohol, pure alcohol, grain alcohol, or drinking alcohol, is a volatile, flammable, colorless liquid with the structural formula CH3CH2OH, often abbreviated as C2H5OH or C2H6O. It is also used as a psychoactive drug and is one of the oldest recreational drugs still used by humans. Ethanol can cause alcohol intoxication when consumed. In common usage, it is often referred to simply as alcohol or spirits.

I’ll be drinking alcohol tonight, and pretty much every night now until the new year. Happy holidays! But in two weeks time, I can pretty much guarantee I’ll look like crap, be feeling anxious, depressed and like putting myself into some kind of self-imposed rehab – in fact, I’m already looking forward to how I’m going to feel after my first ever Dry January. Yes, that’s some serious future-tripping right there, and so not reflective of my usual glass-half-full outlook on life. What about the thrills? The bonding? The laughs? The drunken fun times that await!

Sure, there’ll be all that. And all that used to be one of my favourite ways to pass the time. Being British (a nation of “high functioning alcoholics” according to this former NY Times London correspondent) and a journalist (one of the high-risk professions for alcoholism, I’ve been told), in my circles the fact I spent most Sunday nights in my twenties and early thirties mapping out my week according to my drinking patterns was nothing to shake an AA manual at.

And I learned to drink late – I was teetotal all through college. My boyfriend back then was a big-time weed smoker and by default so was I, but actually in the end it was alcohol that gave me the Dutch courage I needed to get out of that soul-destroying relationship. He was so anti-booze, considering it, along with cocaine, the lowest of low-vibe highs, that when I took up drinking I might as well have been having an affair right under his nose. Which in the end, with the help of some very strong cocktails, I did.

Talk about messy. But right off the bat, alcohol represented freedom to me. And I guess this was the real kicker, but I also found it helped me access a happier part of myself. No surprises there – isn’t this why most people drink, if we’re honest? Even if this means something different for everybody. In my case, I can be kind of intense and alcohol helped me loosen up and see the funny side of life. Felt like it got me out of my head and into in what was going on around me (you can imagine what a miserable pot-head I was).

This to me felt like magic. Here was a potion that sprinkled the world with actual freakin’ fairy dust. And if creativity is akin to spirituality (as the divine Elizabeth Gilbert suggested when I interviewed her recently), didn’t the fact that drinking helped shunt me into the right side of my brain also, in some way, mean it was helping me get closer to…God, the Universal oneness, or whatever? How did we think spirits got their name, anyway? The fact that alcohol had a dark side (the morning after) felt right, like karma.

But like a relationship that sours overnight, something shifted when I hit 35. Maybe it was the onset of my North Node return (a whole other story, but for the astro geeks out there I’m on the Taurus / Scorpio, material / mystical axis – go figure), but I began to fall out of love with my liquid crutch. The hangovers were lasting longer than the highs, and I noticed, as if coming ‘round from a stupor, that certain relationships relied on a steady flow of cocktails to really mean anything to me.

It was also interesting, and unsurprising, that a lot of the people I was meeting who described themselves as having “woken up” to a more spiritual connection with life (you know who you are, readers!) had kicked alcohol to the curb along with negative thought patterns and the majority of foodstuffs besides kale. This got me questioning the real connection between spirits and spirituality. Not least, what it said about my spirit that I still felt (feel!) the “need” to dink in certain situations.

If spirit is the oneness as expressed in each of us, then yes, there’s no doubt that spirits – in the form of a Ketel One martini with a twist, in my case – can feel like an Access All Areas pass to an audience with our higher self. Ego inhibitions slain, I know I’m not alone when I admit I only dance like nobody’s watching after martini number three. And actually dancing when nobody’s watching? Pretty much one of my favourite ways to party with my inner soul tribe.

But note the use of the words “feel like” in the previous paragraph. What my own experience of heightened spiritual awareness has shown me, is that a back stage pass is in no way a satisfactory substitute for paying upfront for the best seats in the house. In other words, sneaking in the back door with access to the free hospitality bar, you’ll probably miss half the show – and have a hard time remembering what parts did touch your soul in the morning.

Now note the use of the word “probably.” Some of the most spirit-affirming moments of bliss I have experienced have been under the influence of spirits. Singing my heart out (don’t you love that expression?) with my girlfriends on a rooftop bar in Ibiza at 2am, because the only other people up there just got engaged; any tear-jerk sunset viewed from the edges of that same mystical island; experiencing sheer, all-consuming love on the dance floor of any given wedding; knowing that the person I’m expressing my love to feels exactly the same as me.

Which goes back to my point about alcohol being a social drug for me. Sober moments of bliss are often the ones I experience on the inside – like the intense feeling of calm after a dead night’s sleep; being guided by a healer over Skype to meet my shamanic power animal; or experiencing a heart-wrenching psychic connection to my father during a deep Kundalini meditation. The fact that I’m experiencing both on a regular basis (veering towards the internal, for what feel like deeper reaching ramifications and for my vanity) feels to me like balance.

Among my more spiritual friends, the fact I’m still quite attached to the external kind – and the substance that helps me reach them – I sometimes feel like Paris Hilton lining up for a hug with Amma. But hey, I’m only human, still a material girl just beginning to explore the true depths of our mystical world. And the fact I’m preparing to drink my way through the holiday season? A couple of years ago I would have been planning the outfits. These days, like I said, I’m already planning the detox.